It was such a normal day. I woke up early to make my dad breakfast as he had a meeting later that morning. It was to be quite a drive but the day was just a simple,really normal day. I contemplated going with him but He said I would delay him.Yeah! He knew his girls. Ha ha ha! so I just prayed for him as He left and went back to doing the normal things of the day. I had completely forgotten about it till nine pm,when I realized that He hadn’t come back home. I asked myself,” Should I be worried?” Nnaaahh, I told myself until I tried calling him and some random man picked up the phone.

My dad was a very conscientious man,called when he would be late,updated all of us of his itinerary no matter what. So when a random man picks up his phone late at night,at a time he is usually home with no fail,panic indeed reined. We called everyone. We went everywhere-hospitals,the golf club and still we couldn’t find him. It was the next day that we were told that he had been in a car accident and had been taken to the national hospital. All his documents were stolen so He was a John Doe. My sister and I rushed there and quickly had him transferred to a private hospital where he was promptly put in The Intensive Care Unit.

What followed were 37 harrowing days of praying,pleading with God,oscillating between hope and utter despair until one day, He took his last breath. That day was 1st April 2014. It’s been exactly six years, two months and twenty days. I can’t believe that time has actually passed because I will be honest,there are days when it feels like it was just yesterday or the day before where his booming laugh preceded him.

“ I’ve come to believe that in everyone’s life,there’s one undeniable moment of change,a set of circumstances that suddenly alters everything.”
Nicholas Sparks-Safe Haven

I loved my dad. Hahaha!! I am not ashamed to say that I even considered myself Daddy’s little girl. He was my best friend. So when he died, it was like a part of me had been ruthlessly butchered off- just like that. No warning whatsoever!! I used to even say that my earthly father loved me more than my Heavenly Father. I didn’t understand God at all and his ways, his thoughts,they were simply beyond comprehension. Why would a good father allow terrible things to happen to good people? Surely it could not be His will. It just didn’t make sense!

It’s funny but the demise of my earthly father opened my eyes to the goodness of a Heavenly Father- one who is there no matter what,one who loves us no matter what,one who reigns no matter what. My daddy dying paved way to understanding Abba. He sent people to stand with us from all corners of the world. He provided in ways that I can’t even understand. After 37 days in ICU in one of the best hospitals in Uganda, you better believe it when I say that that bill was colossal. I had no idea how it would be paid and to date, we just have an inkling of how it was paid. The behind the scene story is still blurry but the bill was paid and we didn’t put a cent.

I still miss my daddy like crazy. I don’t think it ever goes. I think the pain lessens and somehow you are able to go on,move on. It’s the circle of life- one dies, another is birthed,a sunset paves way to a sunrise. Day by day, month by month, Year by Year. I had a good father, hands down,no question about it.

And you know what- I still have a good father. A father who is good no matter the circumstance or season because that is simply His nature. And guess what??!!! I am still daddy’s little girl,loved unconditionally by a good father. It’s who I am. This is me!

Happy Fathers’ Day Daddy! Yes, its been six years,two months and twenty days and we still miss you like crazy. As you chill in heaven,probably playing a round of golf-we apologize but this game was not genetic, may you know that we love you and always will!

To the Daddies and daddies to be, may you remember the impact you have on your children with your presence and your words. All we want is you! My prayer is that you indeed become the Fathers’ you were always meant to be. 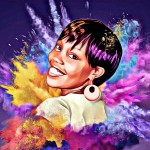 Kajambo, Hello Everyone! Let me tell you a little bit about myself..... I am a multi-passionate Creative Storypreneur, Designer, Creative Consultant and Creativity Coach with a mission to inspire and empower creators- individuals and brands to embrace their stories to unlock their creative potential to design their authentic, purpose-driven brands. I am also the Founder and Creative Director of This is Me!, a digital platform that takes on the role of bringing my mission to life. I love color and all things creative! Well, This is me!